Where it all started.

When Flori and I met some five years ago, he was the first one to show me what true wild adventures were. I have never camped in the wilderness only car-camping at a designated campground. So when he came up with the idea of going on a 10 day canoe trip on Connecticut River I was all in it!

Did we know what were were getting ourselves into? Not at all—mind you neither of us has ever been on a canoe, yes we have been on a kayak maybe twice before but loaded canoe is a whole different dynamic!

So here we are all packed up and ready to go, Our friends drove us all the way to New Hampshire, to drop us off at the bank of the river.

As we were approaching our first rapids my stomach tighten and I started regretting this expedition. We didn’t know what maneuvers to do so we let the water kind of guide the us, it spun 180 degrees, but slowly we were on the calm waters.

You see, camping along Connecticut river is only accessible for the paddlers there is no road access. So prior the trip we obtained the map with all the designated camping spots some better then others. Some had fire pits and picnic tables others were just a little opening for your tent surrounded by wilderness.

As we approached our first campground for the night we were both exhausted after just about of 2hours of paddling. My arms were throbbing my butt felt numb and my legs were cramping up. We set up camp and decided to treat ourselves to grand meal two rib-eyes and roasted potatoes as we knew the ice in the cooler won’t last long and we wanted to avoid getting sick from bad meat. Flori made fire, we set up our tent, just then it all sinked in. There was nobody, just me and this guy I met few months ago. 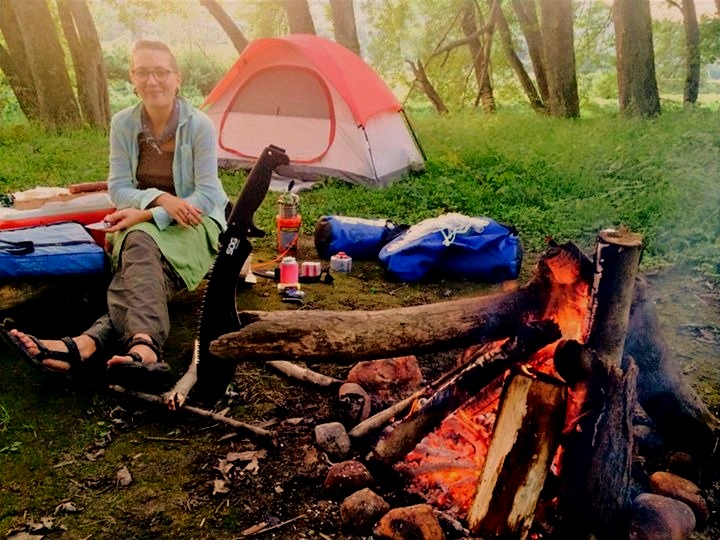 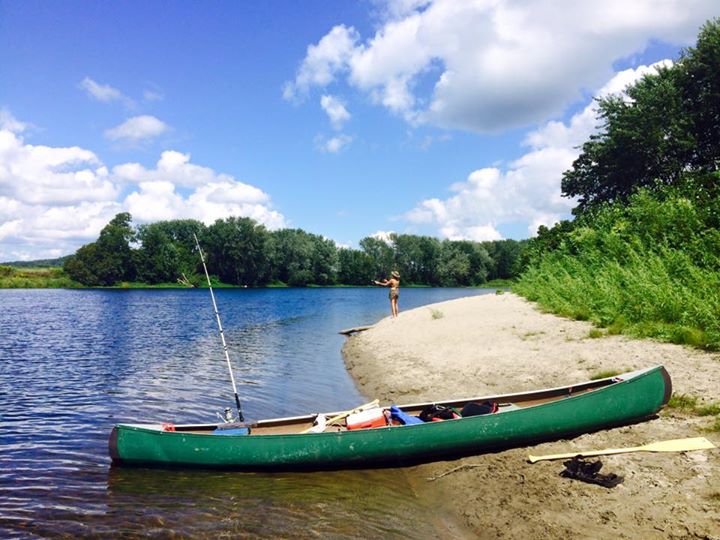 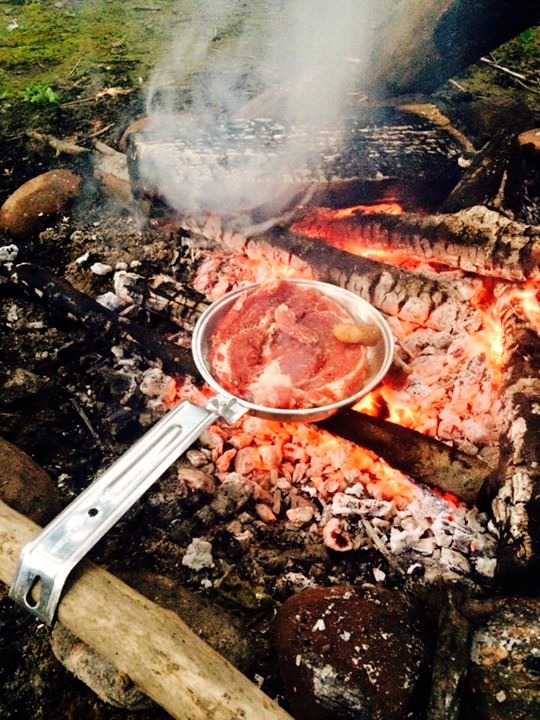 It felt like we were the only ones in the world, everything was just perfect. As we were both tired from all the excitement and sore from our first day we called it a night. As we both settled in our sleeping bags thats where all the invisible creatures started to come out (so I thought) Flori was long long asleep and snoring and it was me and the invisible ones. Wide awake, trying to convince myself that its nothing just innocent animals that don’t care about me plus I’m safe, I got my man by my side. Somehow hours later I fell asleep.

Next day, I was alive, nothing ate me, nor harmed me. I started to feel more comfortable with each day. After breakfast and some morning fishing we set off for a new day on the river. It was beautiful warm morning in August, waters were calm and clear. 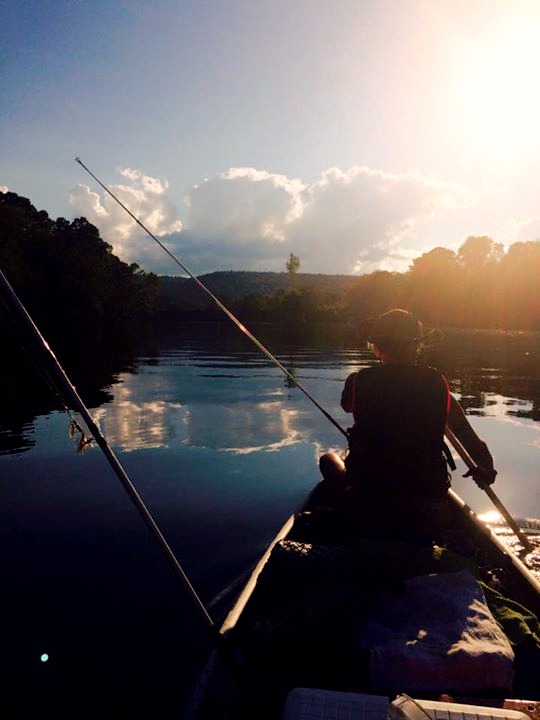 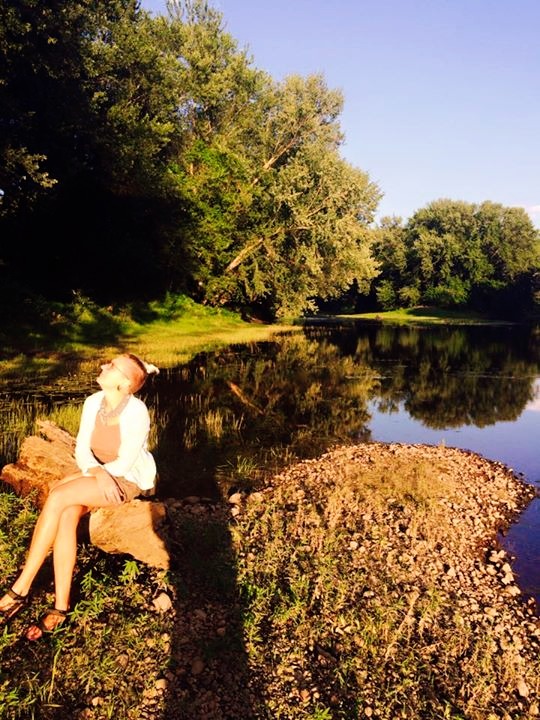 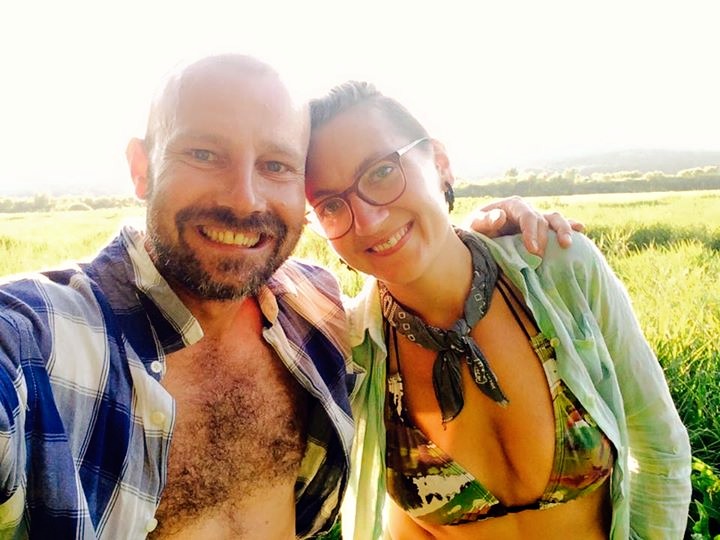 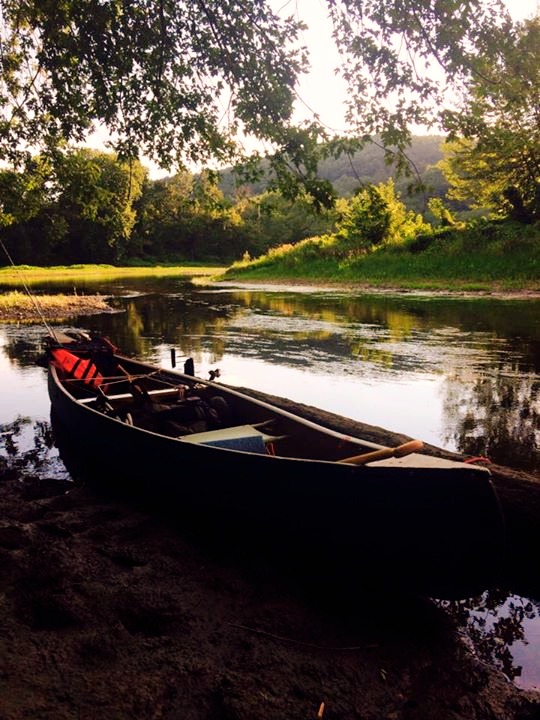 There were parts that the water was so clear you could see the bottom, and all the trash that humans left behind over the years. Such as tires, scrap metal, and other junk that takes ages to decompose if ever!

We came across this massive boulders sticking out right smack middle of the river it was hot and humid day and we needed a break to cool of, so we anchored the boat, took our clothes of and jumped in! Ah the feeling of being alive was so intense and real, yet it all felt like a dream.

Every day felt kind of similar to the other, but each day brought something new. 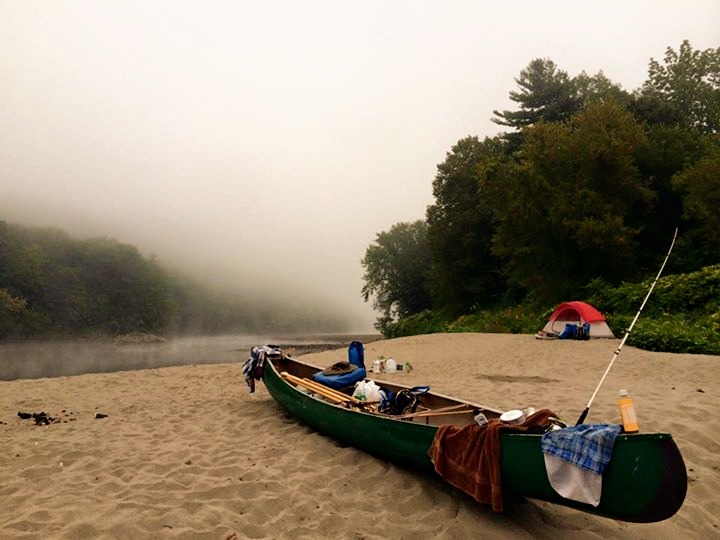 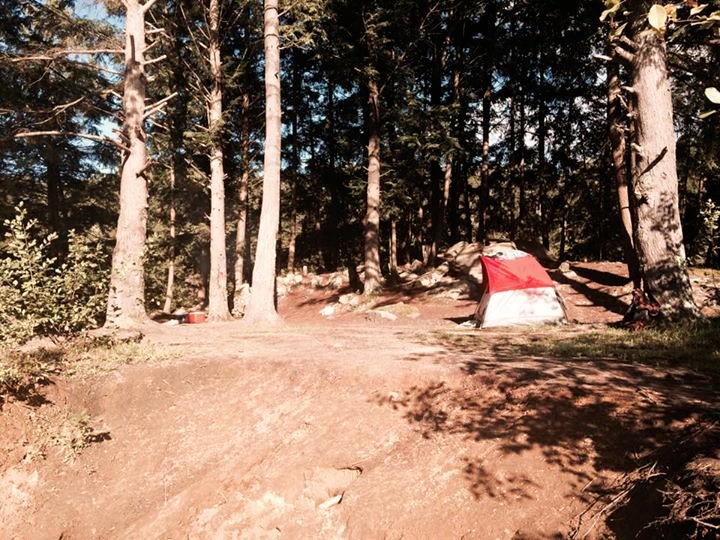 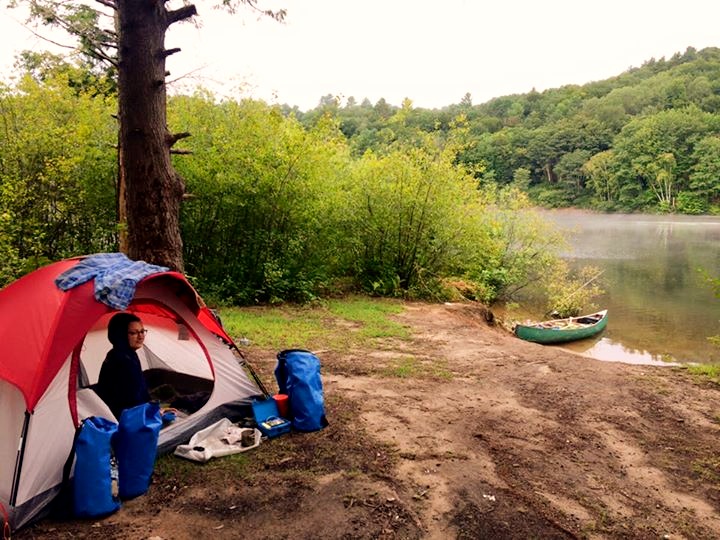 Each camp spot was different ––some would have few other adventurers, but most were empty. On occasion we would pass fisherman in their kayaks or canoes.

I packed only one book as we had very limited space, and it was a random book I got from one of those public grab libraries on the sidewalk. Well it turned out to be a religious book, which to those that know me I am not religious nor interested in becoming one. I was so bummed because you know what was the hardest part to do, 'nothing' yes doing nothing was the hardest part of this journey. I am not big on fishing.

I found my self writing a lot in my journal. There was practically no cell reception most of the time. I would meditate, do yoga, try to enjoy fishing ( which I didn't) probably because I never caught anything. At times I was bored out of my mind and irritated from the nothingness. I can tell you doing 'nothing' its a skill within itself.

One afternoon as we thought we will be winding down for the day and started looking around for a spot to spend the night, before our eyes appeared a dam, massive and scary. To cross it we had to get on the shore take everything out carry the canoe and our gear up a slight hill to

the road and put the canoe on a dolly load up the gear back and hike with it along the road for 1 1/2 miles. Well guess what, once we managed to put the canoe on the dolly and load all of our gear back in it, the wheels just went sideways and we didn't even move 5 feet, another mistake for skimping on the quality of a dolly, this one was certainly not made for all the weight. It was late afternoon we were hot, tired and hungry and stuck. So I decided to take the matter into my own hands, I was wearing shorts and a top from a bathing suite I figured hitch hiking shouldn't be so hard for a half naked girl and it wasn't the first car passing happened to be a pickup-truck who helped us to get on the other side of the dam. This makes me have hope in the humanity. We offered to pay, but they were happy to simply help without wanting anything in exchange.

This trip certainly proved to me how addicted I am to my devices, and the frustration to not be able to connect to the outside world was 'real', but I tried explaining to myself that thats part of this voyage to connect with yourself and get to know this man I fell in love just some short time ago... 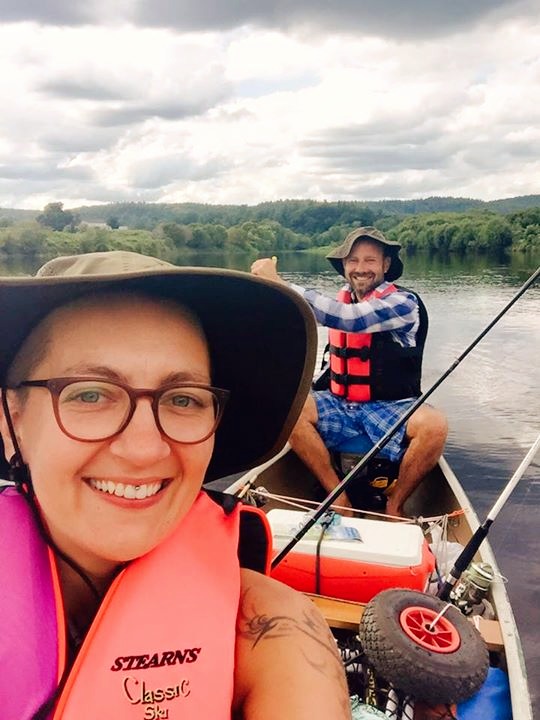 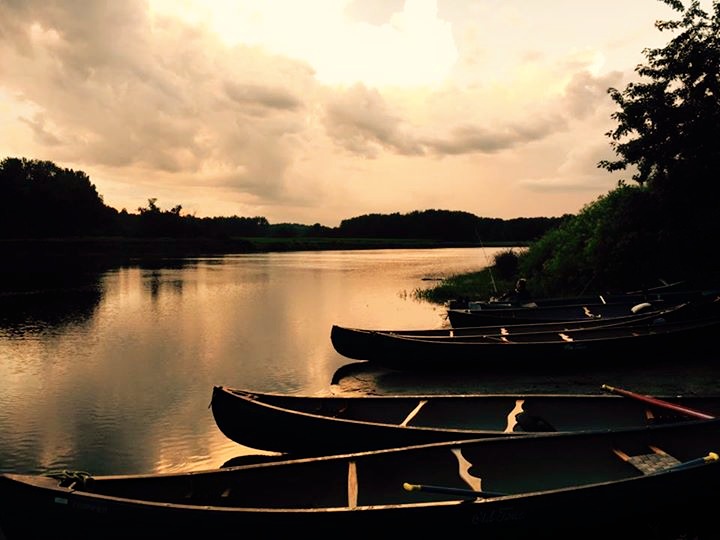 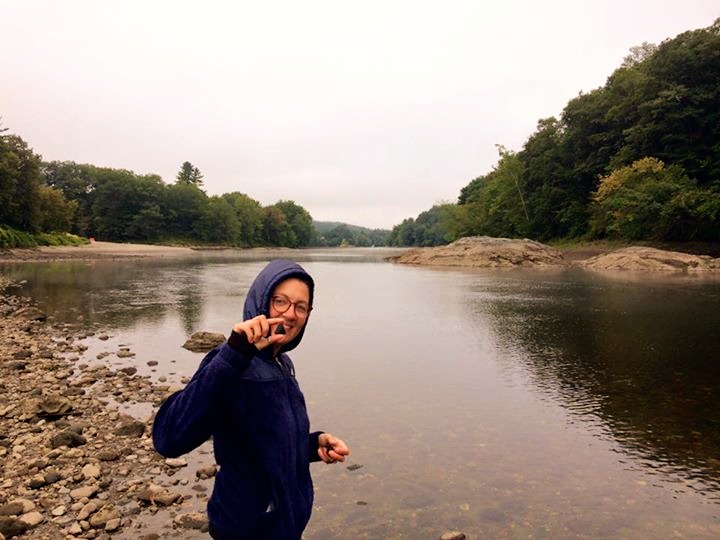 By each day our bodies stopped aching and got used to the paddling and little to no room for our feet, we got better and more efficient at peddling, each day we would paddle for longer, by the mid way we would find ourselves in the canoe for 6hrs straight with breaks for pee and snack.

The weather was beautiful most of the trip, on the 5th day we got stuck at a camp for three days because it was pouring rain. We were surrounded by trees and the storm got so strong with the lightening that we were scared that trees will collapse on our tent.

So lots of whiskey and love making happened in those three days, it was raining nonstop like monsoon. Good thing is we had few tarps and we were able to put one on top and one under the tent so we could stay dry. Plus having a cheap Walmart tent wasn’t that promising but it turned out if we didn’t touch the walls of the tent no water got in.

We would stop by random towns, we would anchor by docks or under bridges and go to town to replenish on ice, water, food. We would bath in the river each evening before the sunset, each of us had our own tasks so setting up camp and breaking down was quick this way we could relax and enjoy time on land. We camped on little islands in the middle of the river, on land surrounded by pine trees, the scenery kept changing as we paddled down. The silence was another thing that was hard to deal with in the beginning, it was so quiet most of the time. Besides few times that the river met the road. Sinking into the nature and being part of it was so incredible.

We are so disconnected from it on our daily basis.

One early morning as we set off in the canoe, we were greeted by bold eagle that was spooked by our intrusion and took off just few feet before our canoe, it felt like it happened in a slow motion, he was massive as he sprung from a branch and flew up in the air we felt the breeze from his giant wings. Breath taking sight.

At the end of the trip it felt like we were on the river forever and if felt good to sleep in my own bed in the comfort of my home.

But it didn’t take long for both of us to miss it, and wanting to be back on the river. We did total of 60 river miles. We both agreed it was one of our best and challenging adventures yet.

The Connecticut river will forever be part of us.